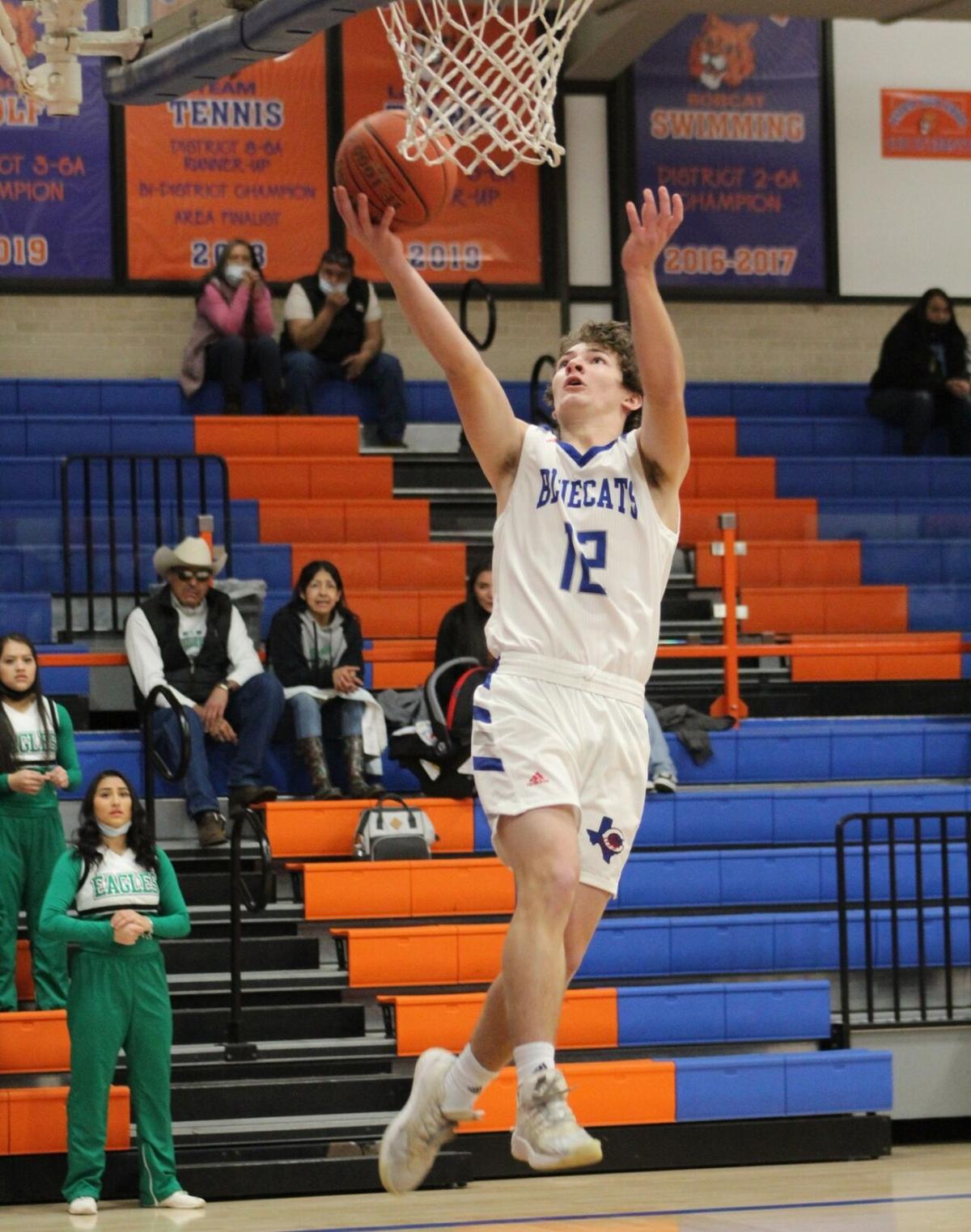 Senior Bluecat Corbin Rosales goes up for a layup on a fast break against Eldorado on Friday night.  (Coleman Today Photos) 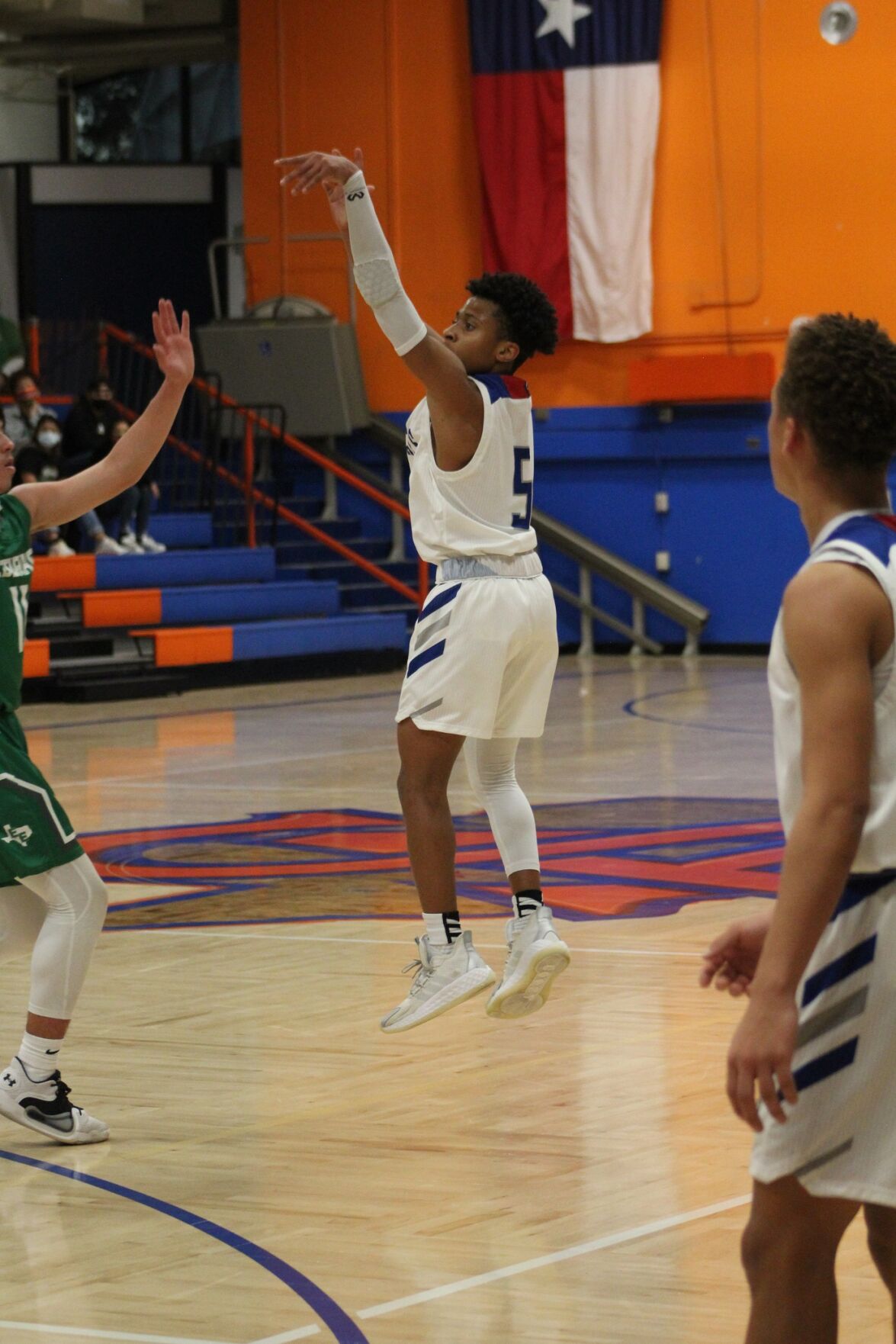 Senior Bluecat Jalen Holloway going up for a 3-pointer during the Bi-District game against Eldorado.  (2021 Coleman Today Photo) 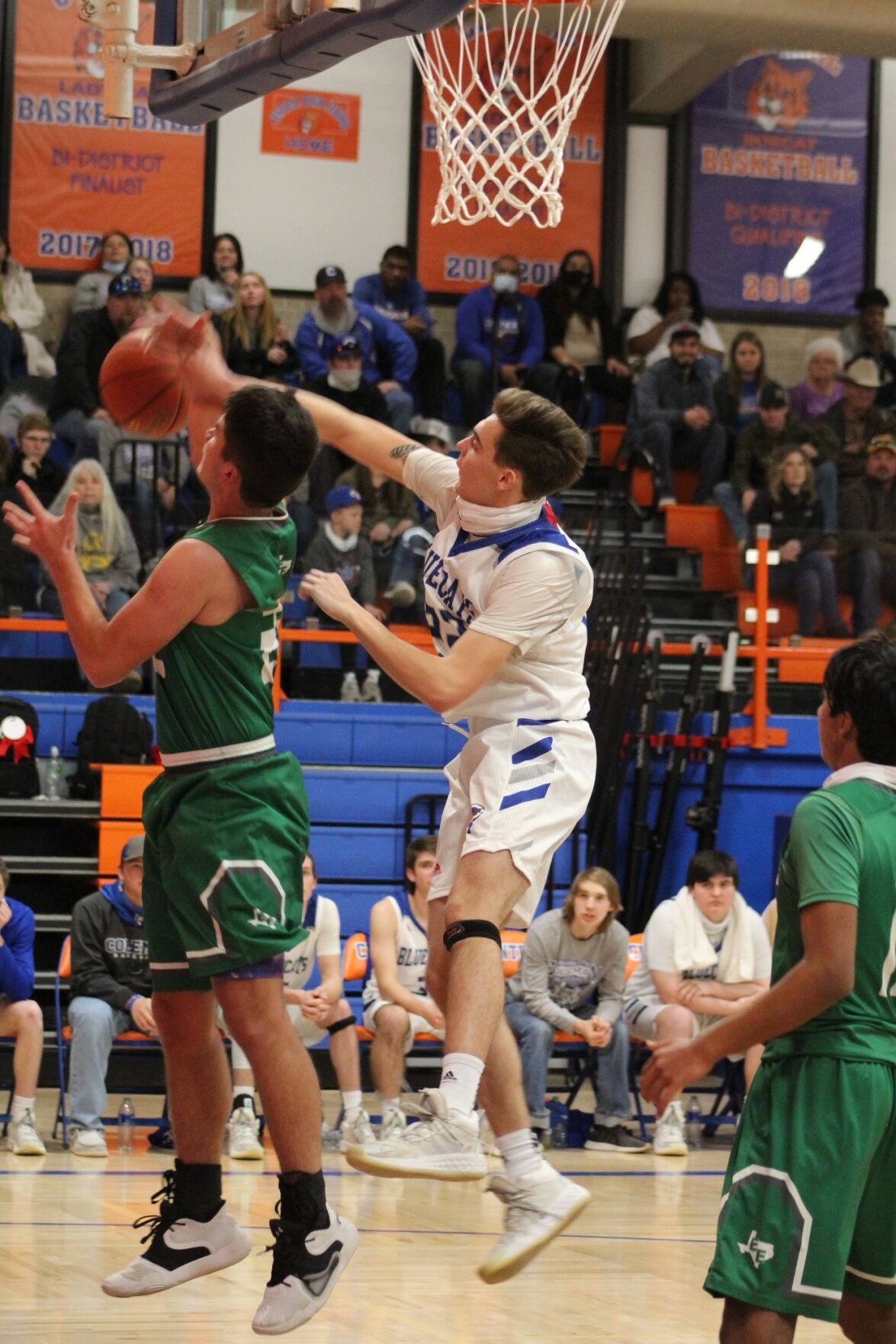 Senior Bluecat Cameron Sikes trying to keep the ball away from an Eldorado player on a rebound.  (Coleman Today Photo)

The Bluecats lost an exciting game on Friday night, February 19th, in San Angelo. The Eldorado Eagles managed to outscore the Cats by twenty points in the 2nd half, giving them the 'thrill of victory' 48-35.

The Bluecats came out firing and stayed in the lead the entire first half, looking like they had control of the game.  The first points scored were by Senior Jalen Holloway on a three-pointer with 7:33 on the clock in the 1st.   Halfway through that period, the score was Coleman 7 Eldorado 4.   After a couple of baskets on each end of the court, Holloway hit another 3, this time from the corner, and the score was 11-6 with 2:54 on the clock.   Senior Cameron Sikes hit a 3 from the same corner, and the Eagles scored a few, making the score 14-11 at the end of 1 quarter.

Senior Corbin Rosales was the first Bluecat to hit a jump shot in the 2nd quarter, and he then made a layup after a steal, bringing the score to 18-13 with 5:01 left in the period. Later in the 2nd, Roby Odom got a steal and drove up the court for a layup, but the Eagles had scored also, 22-17 with 1:42 left in the half. Holloway made another layup on a full court drive, and the score was 24-17 going into the dressing room at halftime. The Bluecats were confident things would continue to go their way the rest of the night.

However, Eldorado had other plans. With 5:25 left in the 3rd, they had tied up the game at 24, with Coleman having not scored in that time period. It tied up again at 26, with less than 5 minutes left.

The game was definitely exciting and kept the cheerleaders yelling and the fans on their feet quite often. The Bluecats could simply not make the normal shots they had counted on all season. There were 15 steals, 4 blocked shots, and 39 rebounds executed by the Cats. They ran the floor and played great defense, but it just wasn't enough to stop Eldorado from taking the lead and keeping it for the remainder of the game.

By the end of the 3rd Eldorado had gone up by 6, 29-35.  Sophomore Braxton Smith was on the free throw line in the first 12 seconds of the 4th, making both, and the game grew closer at 31-35. A couple of free throws later, the Bluecats had 33 points, but the Eagles lead grew to 7 with less than 3 minutes left in the game. Even though Coleman scored again before the final buzzer, Eldorado took the score to 35-48.  The pain of defeat on the faces of Coleman's players and their coaches was obvious.

Coach Cameron Lowman knew the lack of practice games over the past two weeks might hurt the Bluecats, but limited practice this past week due to no electricity at the school was surely a contributing factor, also. They will make no excuses though, knowing that making 29% from the field, 12% from the 3-point line and 33% of free throws are not winning numbers. It was NOT for lack of trying though. The Cats put up 26 x 3-pointers all night, but they only saw 3 of them go through the hoop. It was a very unusual experience for the coaches, players and Bluecat fans.

Coleman Today wants to congratulate the Bluecats and their coaches for an exciting season.  We enjoyed the ride and look forward to the next few years of more wins!  GO BLUECATS!  (Stats from the game are attached and below, and Photo Albums can be found on the GALLERIES page.) 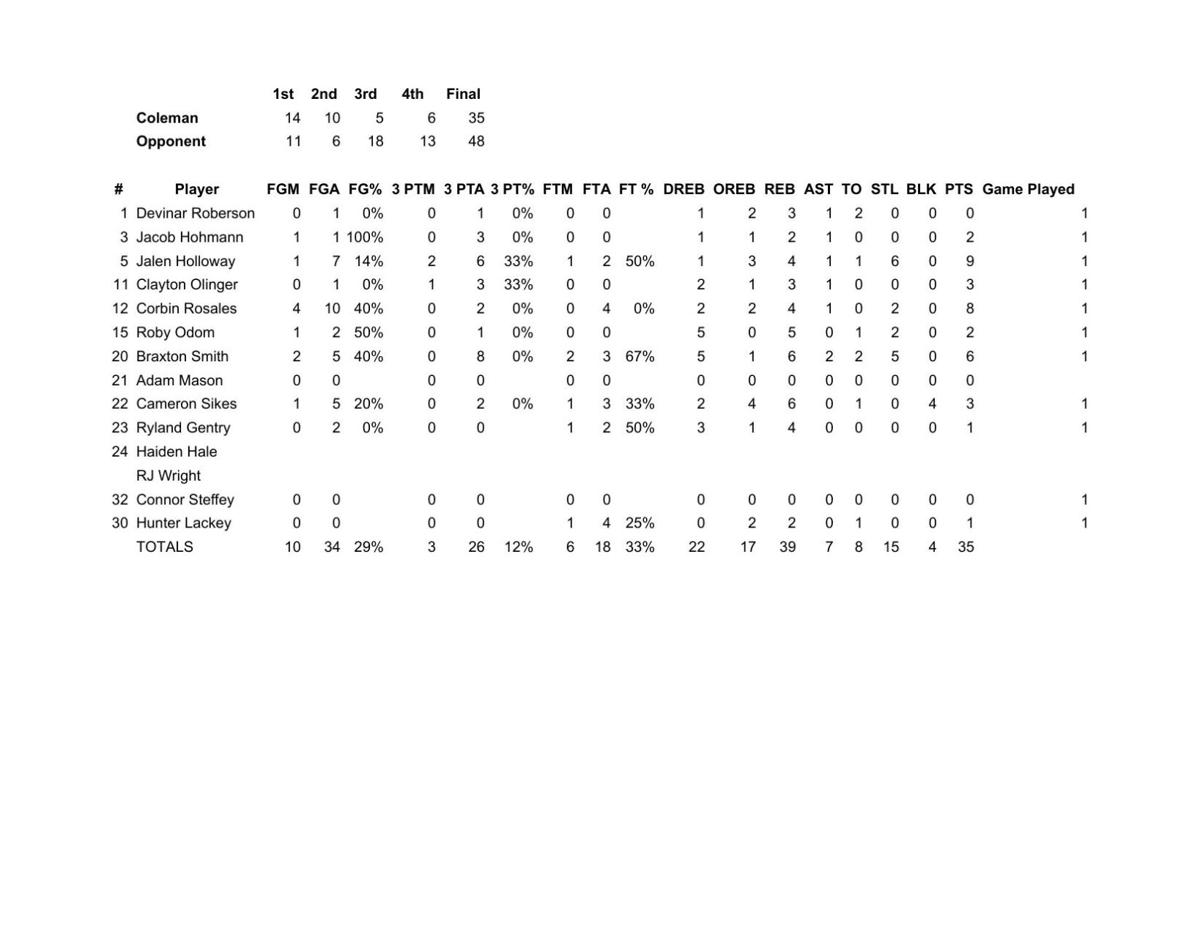