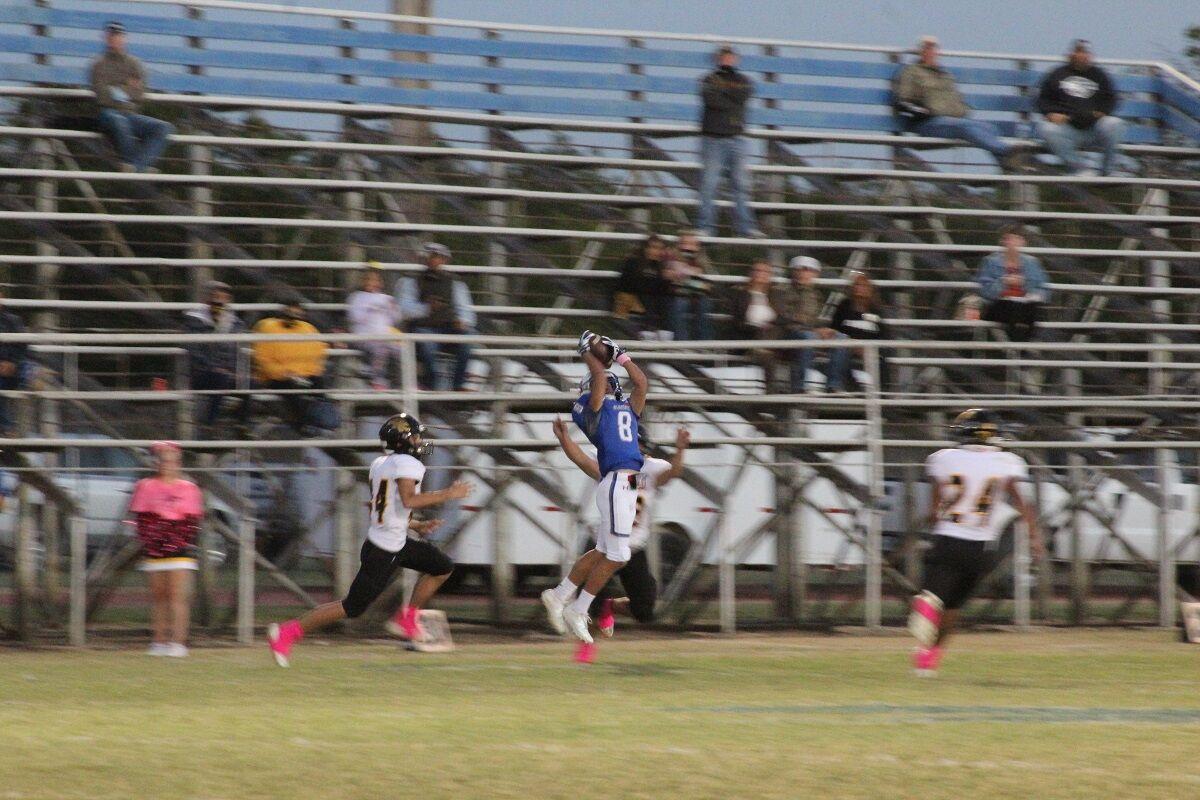 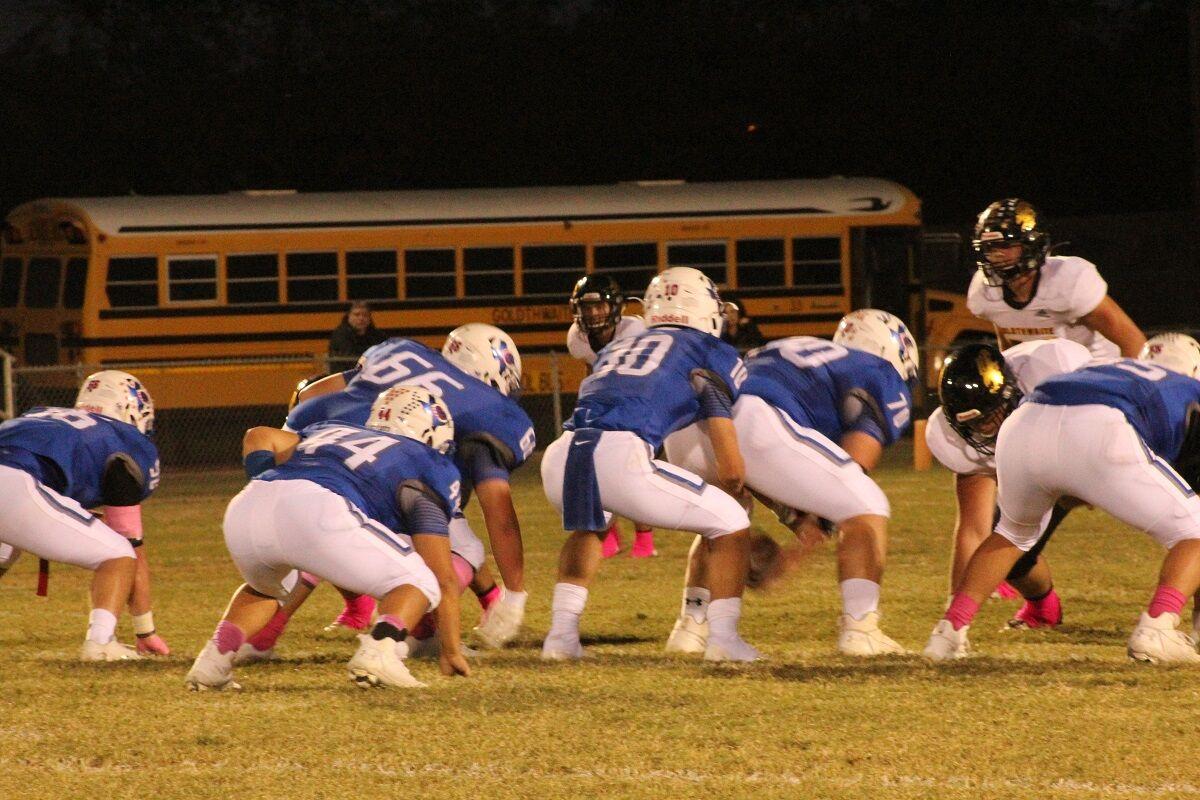 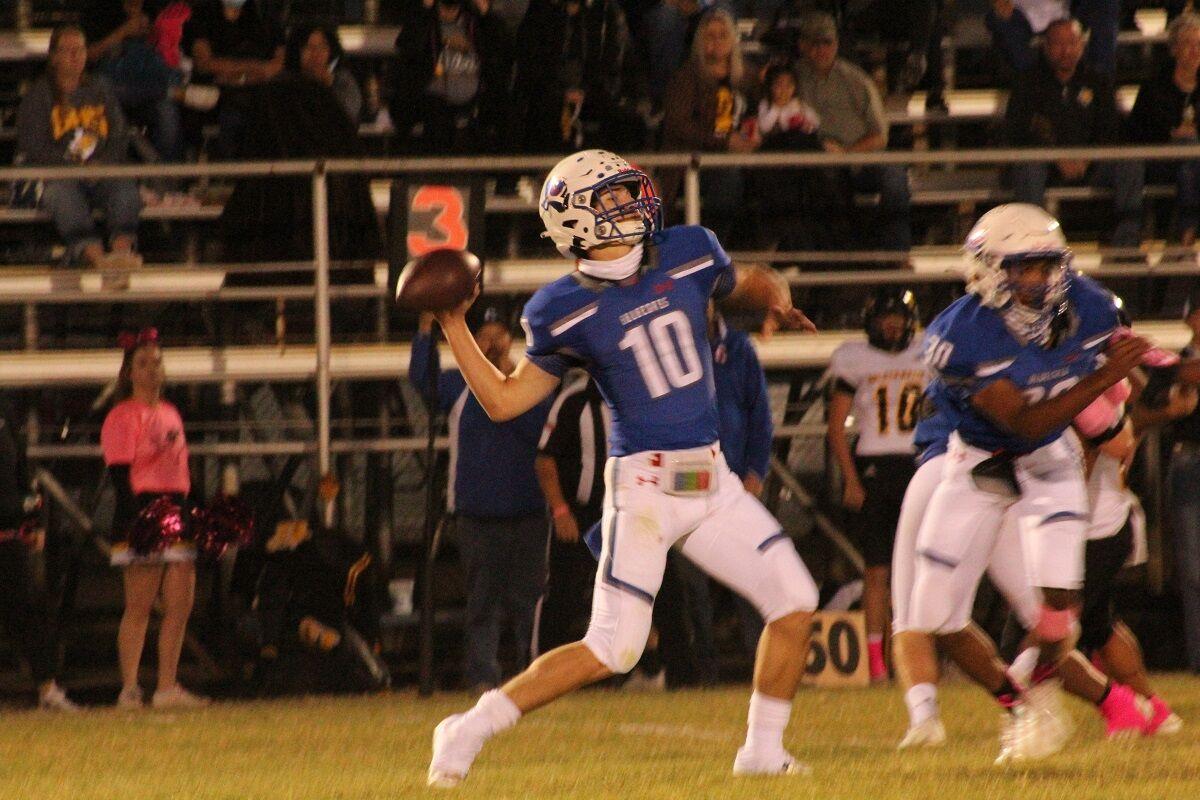 Bluecat Senior Quarterback, #10 Corbin Rosales, is shown releasing a long downfield pass during the Coleman vs. Goldthwaite game at Hufford Field on October 16, 2020.

Bluecat Senior Quarterback, #10 Corbin Rosales, is shown releasing a long downfield pass during the Coleman vs. Goldthwaite game at Hufford Field on October 16, 2020.

The Coleman Bluecats improved their district record to 2-0, their season record to 6-1, with a 28 to 7 victory over the Goldthwaite Eagles on Friday night at Hufford Field in Coleman.  The Bluecats are in first place along with Cisco and San Saba, all 2-0.  Winters, DeLeon and Goldthwaite are all 0-2.

The Bluecats scored first on a 71 yard pass play from Corbin Rosales to Braxton Smith (shown in the photo catching the pass). Christian Villeda kicked the extra point to give Coleman a 7-0 lead with a little over three minutes left in the first quarter.

On the ensuing kickoff, Goldthwaite's Aaron Anzua outran Bluecat coverage and returned the ball 80 yards for what would be the only Eagle touchdown of the night. Saul Vaquera kicked the extra point to tie the game 7-7.

Coleman's next score was a 5 yard pass from Corbin Rosales to Braxton Smith with :49 remaining in the first half. Villeda's extra point kick was good to bring the score to 14-7 at the half.

Coleman scored twice in the 4th quarter. Rosales passed to Cort McFadden for a 3 yard touchdown. Villeda's kick made the score 21-7. Then, with time ticking down near the end of the game, lineman David Navarro became a running back and crossed into the end zone on a five yard run. Villeda again added the extra point to bring the final score to Coleman 28, Goldthwaite 7.

Coleman travels to Cisco to face the Loboes next week. We will post the game stats from Friday night when we receive them.