BURN BAN Back IN EFFECT 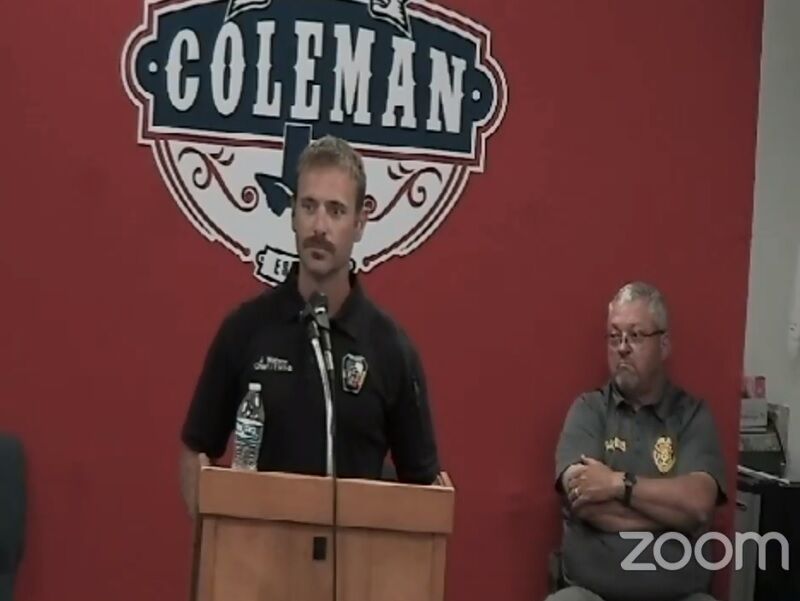 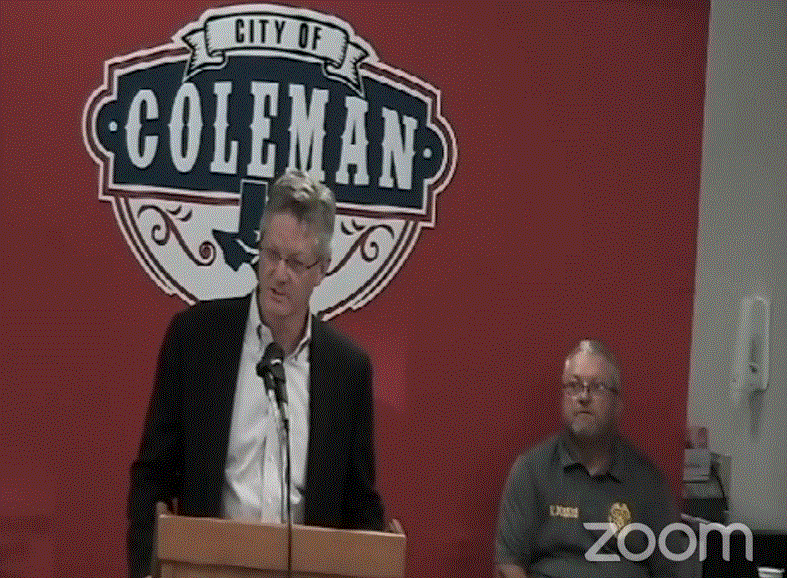 Dr. Glenn Rogers, future member of the Texas House of Representatives and who will represent Coleman County, spoke briefly to the Coleman City Council on Thursday night. 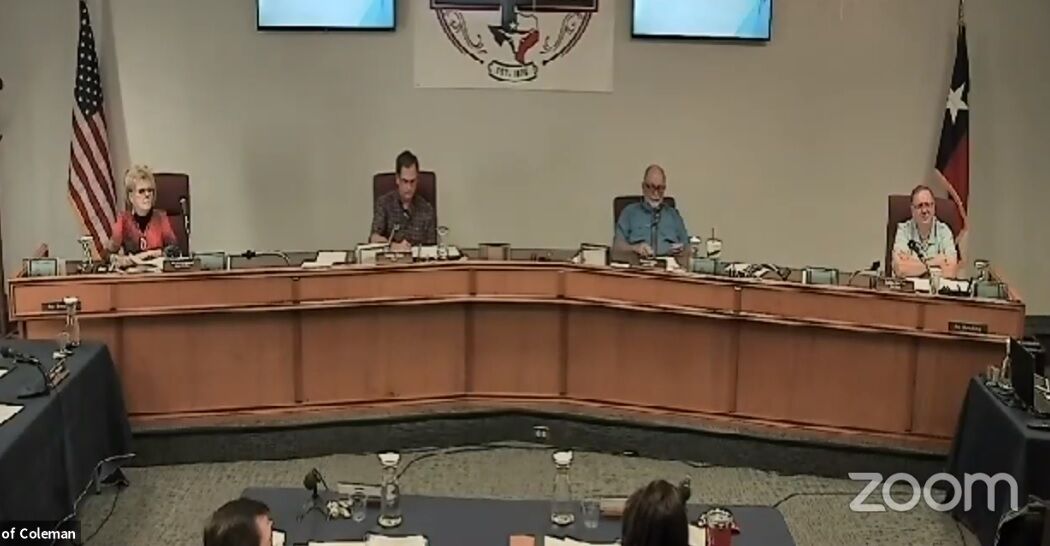 Coleman City Council meetings are available to watch live online on the City of Coleman Facebook page and city website.

Dr. Glenn Rogers, future member of the Texas House of Representatives and who will represent Coleman County, spoke briefly to the Coleman City Council on Thursday night.

Coleman City Council meetings are available to watch live online on the City of Coleman Facebook page and city website.

The Council had a brief visit by Dr. Glenn Rogers who spoke during citizen presentations. Dr. Rogers is the future representative for Coleman County in the Texas House of Representatives. He complimented the community and told the Council he is on a listening tour of all the communities he will represent to determine the needs of each. He wanted the City of Coleman to know they can call him anytime. Dr. Rogers was also in Coleman to speak to the Coleman County Farm Bureau on Thursday night.

Item 6. Hear requests from the City Council for future agenda items. Councilman Bobby McGee wants to review the ordinance for the use of sea containers on the next agenda.

Item 7. Discuss, consider, and act upon the recommendation from the Hotel Occupancy Tax (HOT) Revenue Advisory Board to fund a request for HOT funds to the Coleman County Youth Activity Center in the amount of $3,000 for the Best of the Best Swine Show to take place December 4 - December 6, 2020.

VOTE - The Council voted 5-0 to approve the recommendation of the HOT Board. Between 100 and 150 entries are expected for the swine show.

Item 8. Discuss, consider, and act upon accepting the resignation of a member of the Hotel Occupancy Tax Revenue Advisory Board and possible action upon appointing one member to the HOT Revenue Advisory Board for the unexpired term. Curtis Rogers submitted his resignation from the Board due to moving from Coleman County. Mayor Sloan suggested Ken Bhakta, owner of Coleman Inn, to serve. VOTE 5-0- to accept the resignation of Curtis Rogers and appointment of Ken Bhakta.

VOTE 5-0 to accept resignation of Liz Jones. The consensus of the Council was to reach out to the four alternates before deciding on a replacement. The four alternates are Jeremy Watson, Kyra Neff, Terry Hyden and Brandy Crowder. This will be a future agenda item.

City Manager Diana Lopez and Fire Chief Jimmy Watson gave the Council a lengthy presentation of the assessment. David Bailey of Professional Civic Services Consulting did the assessment of the Coleman Fire Department in Sept/Oct 2019. He reviewed policies, practices, processes and conducted interviews of paid employees and volunteers of the Fire Department. Results were delivered in December 2019. City Manager Lopez noted that Coleman has a hybrid department with both paid members and volunteer members.  The 2021 budget for the fire department is $490,000.

Positive aspects from Mr. Bailey - The City of Coleman values the contributions of the volunteer membership. The fire department has a history of pro actively seeking grants to assist in the funding needs of the organization.

Areas of Concern between Coleman Fire Department and Coleman Volunteer Fire Department - Membership of volunteers and clear understanding of roles and responsibilities. In 2016-2019 there was a weakening of the checks and balances system. Fire Chief was controlling City budget and VFD checking accounts. Prior City Management was inattentive to relationships between City and Fire Management.

Manager Lopez told the Council that Watson was appointed to the Fire Chief position after the assessment was done by Bailey. She held the assessment from Chief Watson and, within 60 days, Chief Watson had identified almost everything that was in the report. Most, if not all concerns, have already been addressed, Lopez said.

Chief Watson - "In order to be effective, we need both the paid and volunteer side. We have checked off a lot of boxes but the goal is to continue to improve."

The report by Mr. Bailey was broken down into immediate, short term and long term priorities.

Immediate Priority 4 - Clear boundaries between the City Budget and VFD Accounts - "We have mitigated this issue" said Watson. City of Coleman purchasing processes must be followed for any purchase that will require the expenditure of funds.

1. CFD Policy Manual, Constitution and Bylaws - Chief Watson said the department has made significant progress concerning this. 80 policies have currently been completed. All members have 24/7 access, via mobile app, to department policies.

2. Adoption of a shift scheduling/time keeping system. The department has made significant progress with policies in place for strong administrative control of shifts and scheduling.

3. Membership and Hiring Practices - this has been mitigated by implementing new programs concerning hiring practices.

4. Coleman Fire Department Members for Deployments - CFD members were being utilized for deployments for state response systems. This is large scale response to disasters such as hurricanes. Deployments are limited to Captains and Firefighters and other ranks only when available backfill personnel can cover shifts. The Fire Chief position is not allowed to go on any type of deployment.

5. Implementation of Performance Measurements or Metrics - this resolution has been completed. Weekly meetings between Fire Chief and city management are held.

Positive aspects of the Assessment

Cohesiveness between two entities, CVFD and CFD, at a high point with VFD members being stakeholders. Members have taken challenges of improving head-on with personal involvement in making improvements. Every member has played a role in the growth and forward momentum of the department. A unified effort between City management and CFD has increased effectiveness and provided opportunities.

City Manager Lopez said the fire department has made huge progress in the past year. Mayor Sloan noted he has received compliments on the department from the public.

Item 11. The City Council may enter Executive Session to discuss the following pursuant to:

A. Government Code §551.074 (Personnel Matters) to discuss the appointment of an Associate Municipal Court Judge.

B. Government Code §551.071 (Consultation with Attorney) to receive legal advice from City Attorney regarding a Chapter 380 Agreement with Cornerstone Community Action Agency.

C. Government Code §551.071 (Consultation with Attorney) to receive legal advice from City Attorney regarding Water Sale and Purchase Contract with City of Lawn.

D. Government Code §551.071 (Consultation with Attorney) to receive legal advice from City Attorney regarding sign placement in a City right-of-way.

The Council went into Executive Session at 6:25 pm.

The Council, minus Councilwoman Hetzel, returned to Regular Session at 7:20 pm.

Item 12. Upon returning to open session, the City Council may take whatever actions as they may deem appropriate regarding items discussed in Executive Session including:

B. Discuss, consider, and act upon a Chapter 380 Agreement with Cornerstone Community Action Agency for improvements to the property located at 1901 Concho Street to include the development of a community pocket park.

VOTE 4-0 to approve the agreement

a. Water Plant - Construction on the $9.1 million project started August 5, 2019. The project is on budget but, due to COVID, has faced a number of obstacles, such as delays in receiving the technology and equipment that runs the water plant because the business that provides the equipment shut down for several months due to Covid. On October 9, city received the equipment. With the delay, the City is having to add 132 days to this project and is now looking at completion in May 2021. The facility is expected to last 70 years.

b. City Manager Lopez then went over the Fiscal Year 2020 Review and highlights of departmental accomplishments and projects. It was a long list to include: