Burn Ban OFF as of July 12th 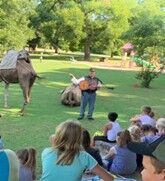 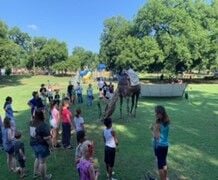 This and much more was learned from Mr. Doug.  After a question and answer time the children were allowed a photo shoot with the camels.

As children arrived they picked up their reading certificates and enjoyed slices of watermelon provided by the Friends of the Library.  Each child received one free swim pass from the City of Coleman, one free fountain drink from Owl Drug Store, one free one-topping personal pan pizza from Coleman Pizza Hut, one free drink from Best Fried Chicken, $2.00 off tea or shake from Sonflower Nutrition, one free cookie from Cactus Coffee Co. and a free ice cream cone from Sonic Drive In.

Librarian Sue Dossey gave a short program to the group attending.  129 children registered and 71 completed their reading requirements.  This year the library partnered with the Coleman ISD ACE Program and brought some entertaining and fun programs each week for children and students to enjoy.  Registration day, June 2nd, kicked off with “May Farms Petting Zoo” and “Move Your Tale”, an Improv group from Austin, Texas.

Arts & Craft Day, Stuffed Animal Storytime with local author Michelle Kaiser reading her new kids book, “Special Ed and the Bull-ies”.  Those attending that didn’t bring their own stuffed animal were presented one by the Friends of the Library.

The library is excited to announce next year’s Summer Reading Program; “Ocean of Possibilities.”

Those completing the reading program: